One can see St. Michael’s Church, with its stone put in place in 1180 on land that had been holy since 850. The Church is built of Penkridge Stone. Looking back to the Chapel opened in 1934 one can see the same stone. A reminder of the days of great religious fervour and rivalries, the Methodists had decided to display their equality with the Church and build with the medieval material.

Dominating the scene is the Littleton Arms. Dating from the 18th century it stands on land once belonging to the church. A successful enterprise in the modern world, it is also a survival from the days when one family, the Littletons, dominated the village for nearly 400 years. Built after the style of Teddesley Hall it became the hub of the village. It hosted great balls for the local aristocracy and entertained the humblest tenants on the estate rent days. The law abiding went there to pay their taxes and the law defying to stand before the magistrates.

The Littleton Arms and the George and Fox are evidence of the days when Penkridge was a bustling centre of the golden age of coaching before the road was widened to accommodate the internal combustion engine. The Littleton survived physically, the George only in name.

The traffic island on Crown Bridge, lacking the courage to edge out into the main road, is the forlorn ghost of a busy triangle of shops and houses that were at the heart of Penkridge before demolition in 1931. The antiquity of Penkridge is shown by the Railway Tavern. Named after the railway which came in 1837, for many years it was the newest pub in Penkridge despite displaying the wattle and daub of its Tudor origins.

The huge crowds and traffic congestion attracted by Penkridge’s market are a continuation of the village’s role in history. The site was and remains the area’s cattle auction. Farming was central to the village’s life and there was another, competing auction by the Railway Tavern. Above all, the village was famous for racehorses.

Just around the corner from the A449 are the Horse and Jockey and the Horsefair but in the 18th century the narrow streets of the village were swamped, once a year, by horses, horsedealers, jockeys and gentlemen for the horse fair. Daniel Defoe said, in 1724, “In a word I believe I may mark it the greatest horsefair in the world for horses of value”.

The true history of a place lies in the lives of its people. Many famous people knew and visited Penkridge, if only from the vantage point of Teddesley Hall. They included the Duke of Wellington, Sir Robert Peel, Handel, John Wesley, Alexis de Tocqueville, Daniel Defoe and George Orwell. The essence of the history of Penkridge, lies with its people.

Protected from the noise and bustle of the main road by the churchyard wall lie the remains of the people of Penkridge, the 18th century names and epitaphs gradually fading as the result of 20th century pollution. In front of the wall, probably obscured by parked cars, the memorial to the dead of the two world wars. So, in one spot, in the midst of the noise and congestion of the busiest part of Penkridge one can see the outline of its history.  It is worth knowing and worth preserving. 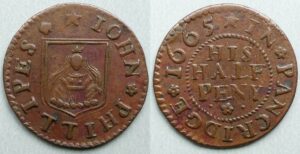 Did you know Penkridge had its own currency many years ago?  Ion Phillipes, Mercer (Textile and Silk trader) of Penkridge, had a Token issued in his name.  On the heads side it was inscribed “Iohn Phillipes – his half peny” and on the tails side “IN Pancridge 1665” and The Mercers’ Arms.

It was made in both copper and brass.   It is not known how many were made.  Has anyone in Penkridge got one of these today?  In the seventeenth century, only 31 towns in Staffordshire had their own tokens.  For Penkridge to have one, showed how important the town was then for trade in textiles.  Every person who issued these tokens was obliged to take them again when brought to him.

Tradesmen who accepted them would then take them to Mr Phillipes and he would change them into silver.